So ever since reading a review of Puppy Chow is Better than Prozac on this blog, I have become enamored with a genre seemingly exploding in popularity, mostly thanks to a little book called Marley & Me. I have probably dropped a hundred bucks on nonfiction books about dogs and their humans in the past month. I mostly blame the fact that I’ve had dogs, cats and assorted other animals all my life until I got to college. Even now, ‘my’ animals at the SPCA are not mine at all. Unfortunately, owning and loving and caring for my own dog is not going to happen anytime soon. 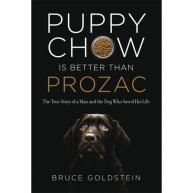 Until that time, though, I’ve been living vicariously through people such as Bruce Goldstein, who wrote a fascinating story chronicling his battle with manic depression and the black lab that saved his life.

The first section of this book is a personal, in-depth account of how Bruce’s brain works during his swings. Hallucinations of devils and his kitchen knives encouraging him to kill himself are so realistic that you are terrified for him and also heartbroken as he drives the people in his life away (my uncle ended up divorcing my aunt cause he couldn’t handle the periods when she would drive him away and accuse him of trying to kill her).

When it seems like too much for even the observer to take (imagine Bruce living this life) the star of the show enters, as if by magic. But, as the real world often teaches, things are not hunky dory right away. Panic sets in just after getting the puppy and Bruce almost gives up several times. It is only through trial and error, courage and unconditional love that Ozzy the black lab trains Bruce to live well.

What’s so great about this particular piece of puppy nonfiction is that you also get a heartbreaking and almost terrifying glimpse into the addled mind of a manic depressive. Manic depression is a combination of two mental disorders: Mania (which is a high mood usually accompanied by disjointed talking with broken up thoughts and rushed speech – kind of like someone who’s had one too many espressos) and Depression (a severe low in mood usually accompanied by self-deprecating thoughts and sometimes thoughts of suicide). Both highs and lows in a manic depressive get accompanied by various forms of hallucination or paranoia.
And just like all examples of puppy nonfiction, you join the humans on a journey that can only begin when you live with a dog.

All in all, one of the best books I’ve read in a long time.

Next on my list: Something by Jon Katz, no doubt. His stories of Bedlam Farm and the animals a city boy like him are raising there are quite poignant (A Good Dog made me laugh out loud and break out in sobs).

One thought on “Obsessed with Doggie nonfiction…”

What I'm thinking about